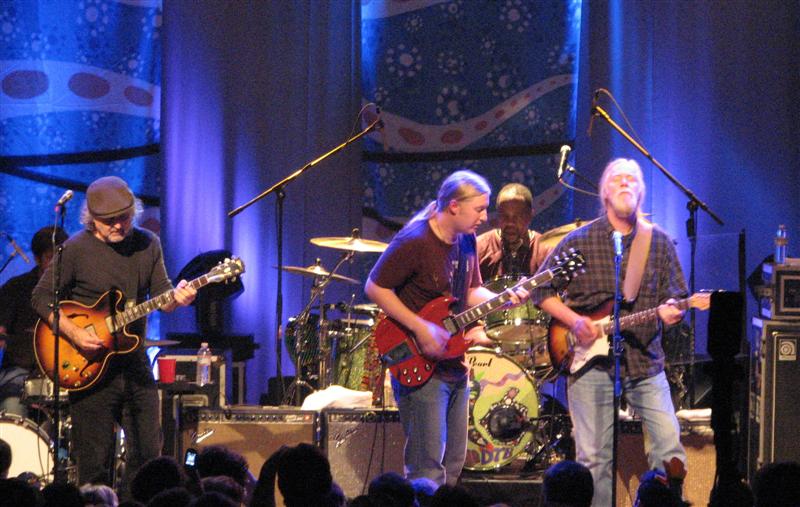 Lots of guests, there was one other drummer on the small 2nd kit that was not announced. Trumpet player showed up on stage about 3/4 into the set.

Just in case -
that drummer on the little kit was none other than Jeff Sipe.

Reviewer: honestdboy - favoritefavoritefavoritefavoritefavorite - January 20, 2010
Subject: Long Live DTB!
This is an absolutely brilliant performance, which really ends with a bang in the last 2 songs. This band just keeps getting better and better. I hope the hiatus is a short one.
Reviewer: markbear - favoritefavoritefavoritefavoritefavorite - December 16, 2009
Subject: An Incredible Evening of Music!
I’ve now seen this band at least a dozen times over the past 10 years and I must say this was the most ‘seasoned’ performance yet. Derek’s exhaustive and extensive touring schedule with the Allman Brothers Band as well as his own has him playing at a level that very few musicians ever attain. Also, I suspect the fact that he has played with so many different and diverse musicians recently has enabled him to further his already impeccable ability to play what the musical situation dictates, as opposed to what he wants to or could play. There is a reason why, when Eric Clapton could have selected ANY guitar player on the planet to join him on tour last year, he chose Derek!

Big kudos to Mr. Soul as the sound of this taping is very good - crisp and clear!

This evening the set-list was deep, wide, and diverse playing tunes from their new album, but also digging into older records as well as some Derek and the Dominoes tunes (Anyday & Key to the Highway) and also some great soul tunes that his Soul Stew Revival does like Hercules and Feel So Bad, and then they did the most incredible My Favorite Things.

The evening was a cornucopia of musical guests starting with Susan Tedeschi, Col. Bruce Hampton, Jimmy Herring, Apt. Q258 (Jeff Sipe), Duane Trucks, Tinsley Ellis, the drummer from the Dobbie Brothers current band (don’t know his name), and a great horn section with a tenor player with some impressive jazz chops that he flaunted on more than a couple of tunes. I’m looking for a setlist but no luck yet.

This was probably the most fun and best show I have seen this year.
Reviewer: bear's_choice - favoritefavoritefavoritefavoritefavorite - December 7, 2009
Subject: incredible
Maybe it was Atlanta, maybe it was the Variety Playhouse, maybe it was having Col. Bruce, Tinsley Ellis, Jimmy Herring, Susan, Duane Trucks, a horn section, I don't know, but Derek was on fire. A quick glance at the length of the songs will give you an idea of how many incredible jams developed this night. Many thanks to Mr Soul for tapping--it looked like you were swamped by screaming people (I think can hear myself contributing to that crowd noise). Nevertheless, this is a great recording!
Reviewer: fadeaway - - December 5, 2009
Subject: Thanks
Wow! What a great looking show. I can't believe I couldn't make that. Thanks for taping and sharing though!! Did you happen to get the Tinsley Ellis set as well?